Our iPUG website has been updated. It is faster all around, Links page is updated, the Help and Gadgets pages are new, and our older meetings page is easier to read. Our site is now hosted by Siteground. Please share it with friends and provide feedback on the changes, good or bad. :)

Hurricane relief: Apple has set up a page for donating to those affected my hurricanes Irma and Harvey. Easy donation via iTunes, and 100% of it goes to charities. 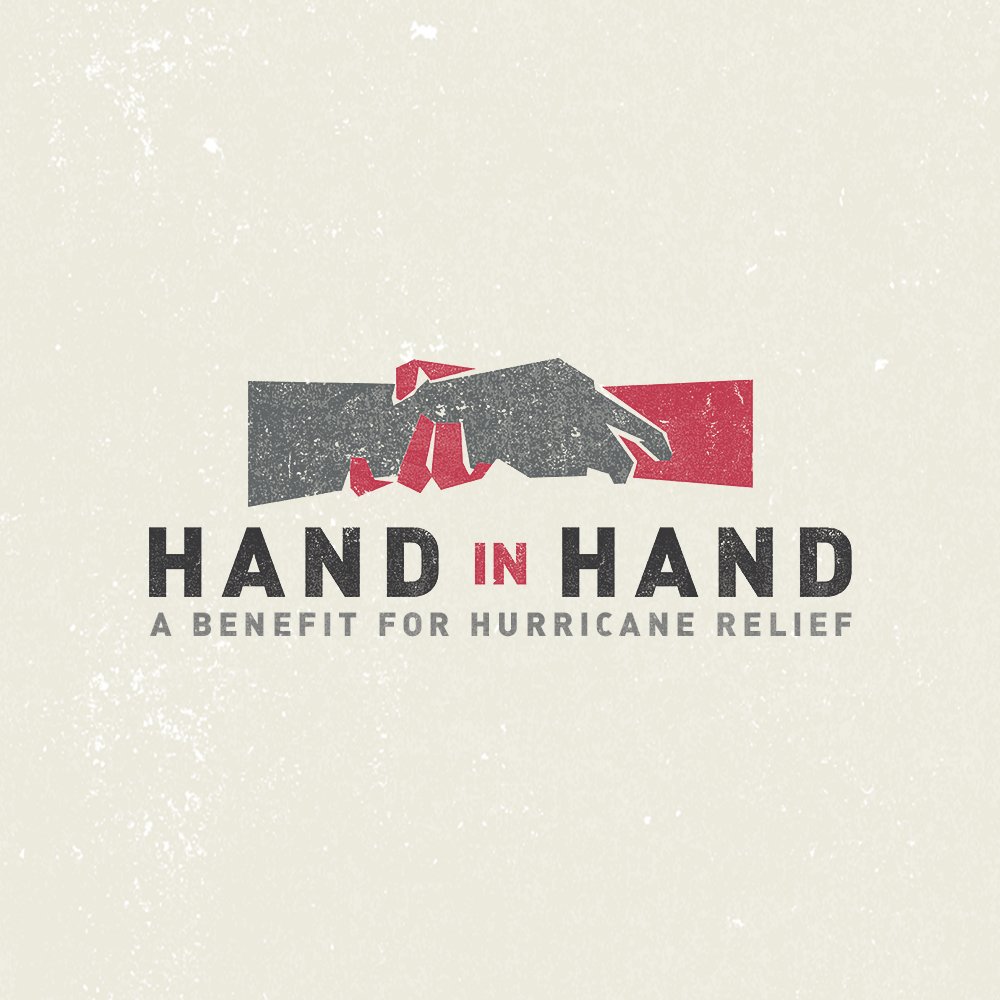 AccuWeather responded about this scandal, and John Gruber writes about `Wading through AccuWeather's bullshit response'. Yes, it's pretty bad.

The Apple mothership, photographed at 8:30 this morning by Jim Dalrymple: 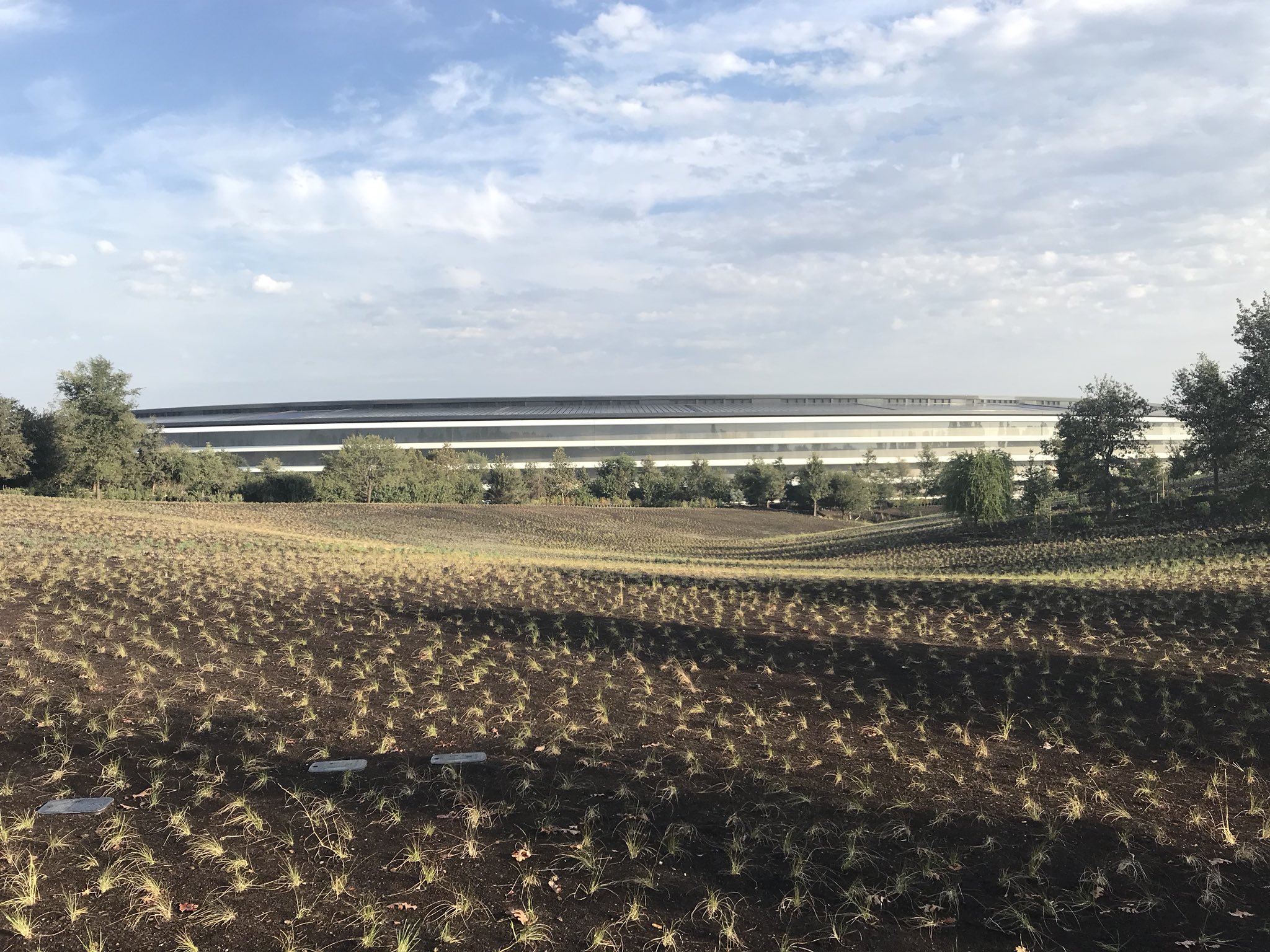 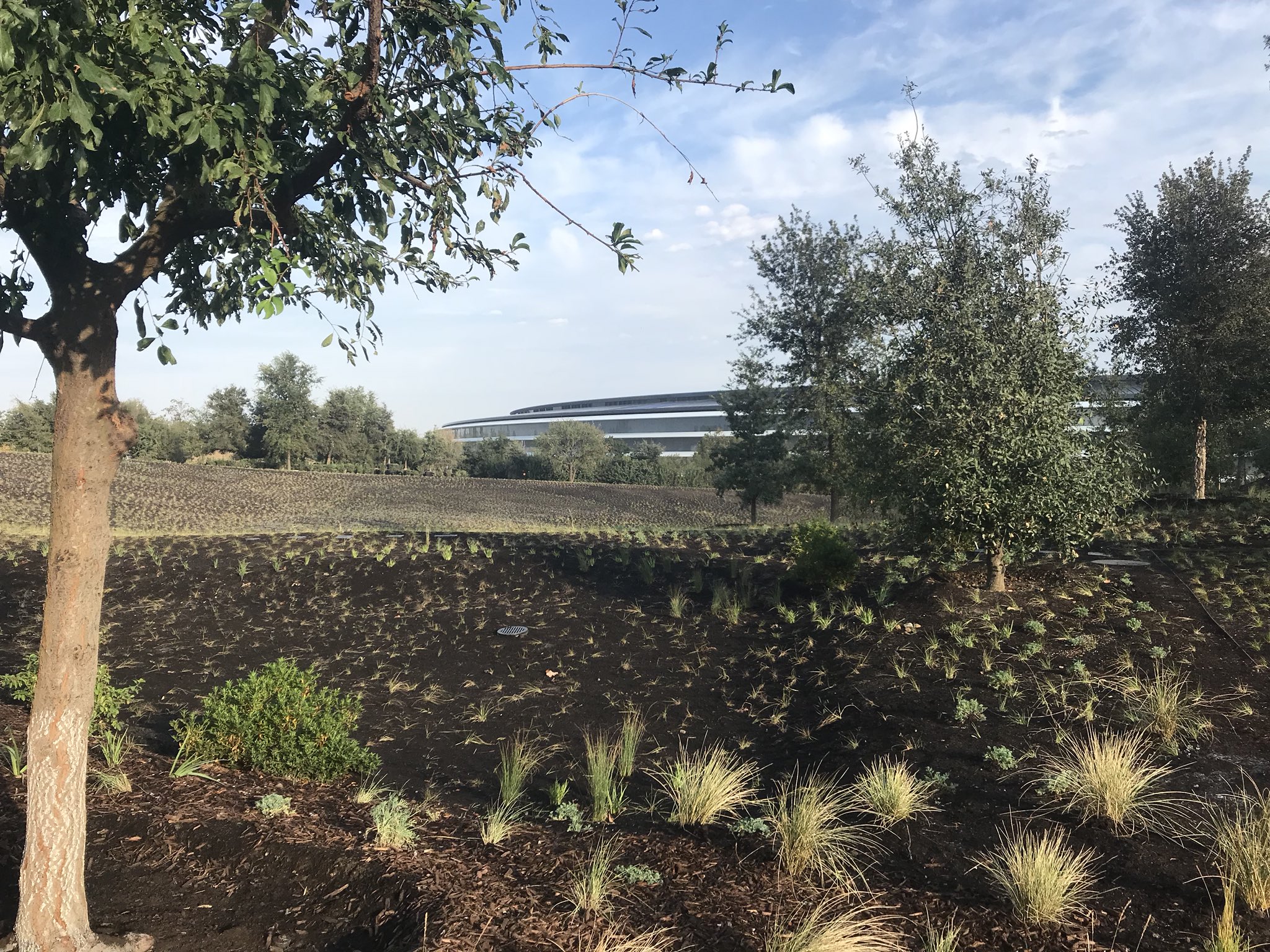 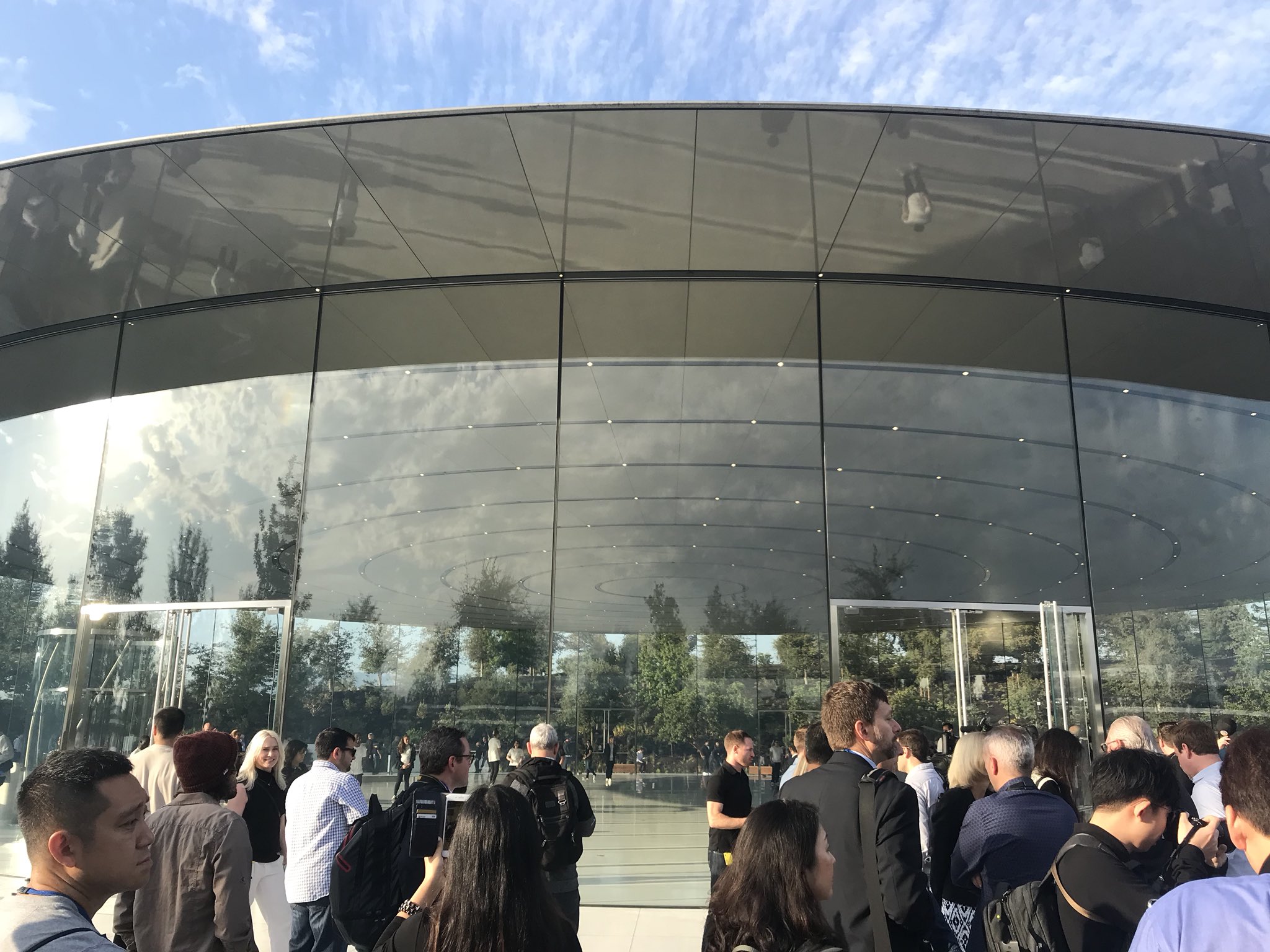 Various journalists tweeting photos and videos before the event this morning:

Inside a Jony Ive garage. pic.twitter.com/P1AWlgH148

Looking inside Steve Jobs Theater, the scale is woah. Feels and looks like some kind of Egyptian or Space structure. pic.twitter.com/6ol5MT2u8A

Very scenic. (And I just got kicked out of this space/path). pic.twitter.com/CBugX6Zpfx

We have the answer as to how one passes exhibit space in SJ Theater w/o seeing gadgets:

The roof is held up just by glass. pic.twitter.com/GjVKZudBFP

You know you’re in Silicon Valley (and near Apple’s campus) when you see a DuckDuckGo billboard. pic.twitter.com/QazVmeRZgk

Jony is showing Marc Newson around. No one seems to be noticing them.

This year even the press badges are recyclable. #appleevent https://t.co/89AHPsnlAf

Also, iOS 11 and watchOS 4 will be available for download on Sept 22.

Here is the whole event at just under 2 hours: Apple Keynote, Sept 2017. You can also watch on Apple TV. Worth watching this, even in portions.

The keynote started with a heartfelt tribute to Steve Jobs: Audio of Steve Jobs, followed by Tim Cook making remarks about him and about Apple: `we dedicate this theater to Steve because we loved him and because he loved events like this. To inspire the next generation of creators and innovators... Steve’s vision lives here at Apple Park and everywhere at Apple. Today and always, we honor him.’

Tim Cook also mentioned the new Visitor Center at Apple Park. Open to all. Has an AR area to play with new tech.

watchOS 4: Smart activity coaching, gym kit enables sync with machines at gym, notification of high heart rate if it happens when you are not active, arrhythmia detection. Apple Heart Study will use data from Watch to analyze arrhythmia, atrial fibrillation detection, in collaboration with Stanford Medicine and FDA. Later this year, download from the app store.

The new Apple Watch Series 3 was introduced. Same num as your iPhone, will stream music. 40M songs on your wrist. Barometric altimeter tells you flights of stairs you climbed, etc.

See the Interactive watch and band gallery. Beautiful way to decide what combination appeals to you.

The new iPhone X is `the future' says Apple. Has 2 more hours of battery life compared to iPhone 7. Face ID uses a `TrueDepth camera system made up of a dot projector, infrared camera and flood illuminator.’

Face ID unlocks iPhone X only when you look at it and is designed to prevent spoofing by photos or masks. Apple went as far as to work with Hollywood to create masks to make sure that Face ID cannot be fooled.

Animoji is funny and will probably be used a lot. Fantastic technology behind it.

See some photos from Jason Snell at the Keynote.

In its first 10 years, Apple sold at least 1.2 Billion iphones, making it the most successful product of all time, reports Asymco. Total revenue: close to a Trillion US Dollars (980 Billion).

Apple has improved Siri’s voice in iOS 11 using deep learning to make it closer to human intonations, as described in a paper by Apple. Look at the bottom of this paper to hear samples comparing iOS 9, 10, and 11.

Google is paying Apple $3 Billion to remain the default search engine for iPhones and iPads, according to analyst Bernstein, reports CNBC. `The firm believes Google will pay Apple about $3 billion this year, up from $1 billion just three years ago. Court documents indicate that Google paid Apple $1B in 2014, and we estimate that total Google payments to Apple in FY 17 may approach $3B,’ Bernstein analyst A.M. Sacconaghi Jr. said. ‘Given that Google payments are nearly all profit for Apple, Google alone may account for 5% of Apple’s total operating profits this year, and may account for 25% of total company OP growth over the last two years. Apple's iOS devices contribute about 50 percent to Google's mobile search revenues.'

Now the the iPod is no longer available from Apple, here is where you can buy an iPod Shuffle, writes Macworld.

Now that the iPod has been retired, the iPod successor is the Apple Watch, argues Macworld. You can load it with music (it has 8 GB of storage capacity after all), and use a bluetooth speaker or AirPods, and you are done.

Apple Store iOS App now supports Touch ID for authenticating payments with your Apple ID, reports Macrumors.com. Recall that the FASTEST way to order newly released products is always through the Apple Store app, and not through a web browser.

Since Apple has made beta versions public, we are benefitting from many good previews of iOS 11, from testers who want to share. See some overviews and videos below.

A nice and quick overview of changes with iOS 11 on iPad:

Learn more about iOS 11, some highlights by Macworld.

Also, iOS 11 is bringing a new feature: Do not Disturb While Driving:

A very nice demo and overview of new features coming with iOS 11, by 9to5Mac.com:

As we prepare for iOS 11, Gail pints us to a nice overview of iOS history, starting with the first release.

A look at the 10-year evolution of the iPhone, by Quartz.com.

AR is Augmented Reality and ARKit in iOS 11 is Apple's framework for developers to incorporate AR in their applications.

Or you can use Kabaqit to `see' menu choices at a restaurant:

With ARKit, Apple glasses are `inevitable', argues tech analyst Neil Cybart. `It is no longer a question of if, but when, Apple will use AR to rethink glasses. '