Today, October 5, 2021, is the 10th anniversary of Steve Jobs' passing. Today's Apple homepage has a tribute, including a short video and a statement from his family: 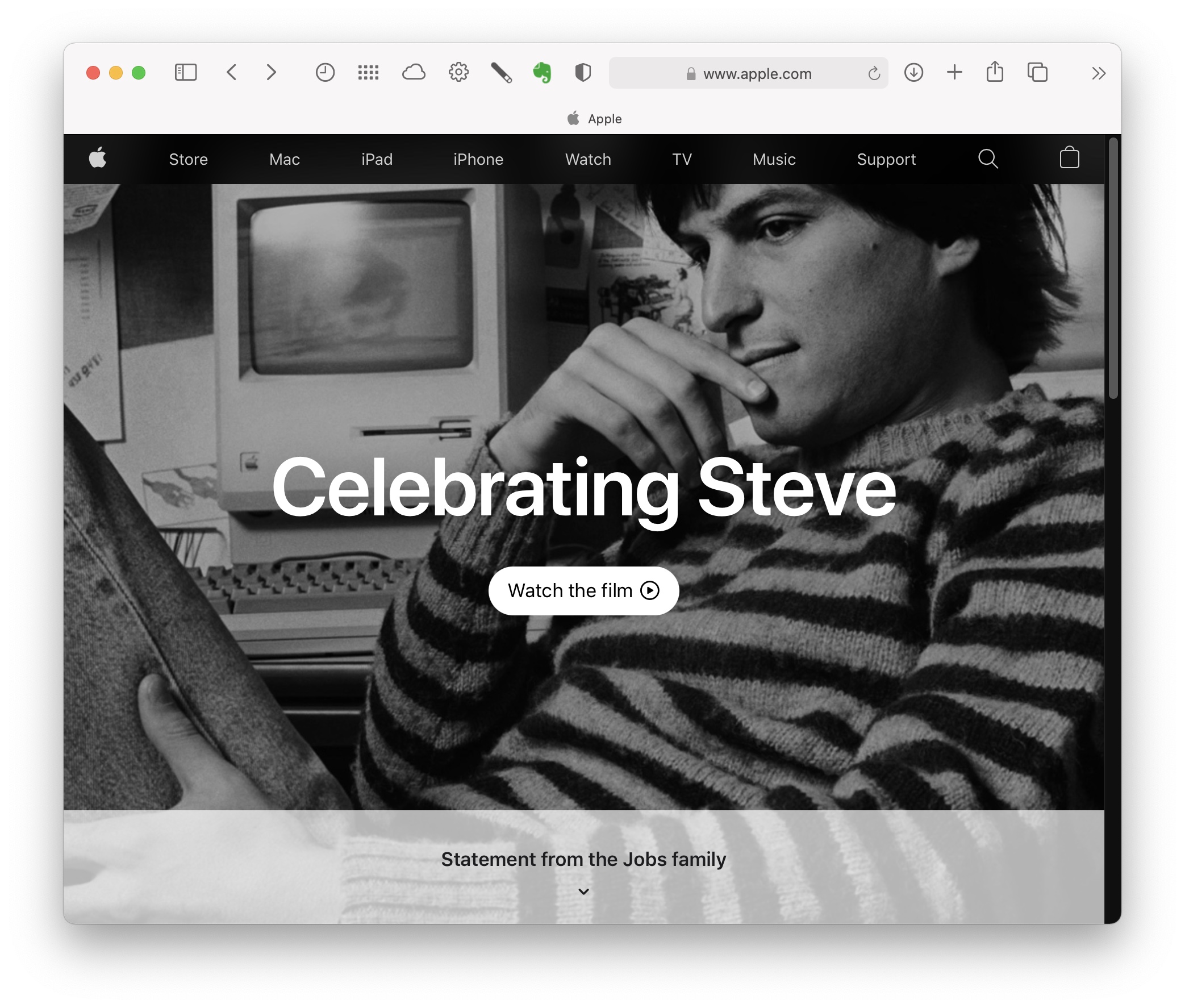 “People with passion can change the world for the better.”— SJ. Hard to believe it’s been 10 years. Celebrating you today and always. pic.twitter.com/x2IUnlO7ta

Jony Ive published a column in the WSJ: Jony Ive on What He Misses Most About Steve Jobs. It's beautifully written and worth reading.

Also worth remembering how Tim Cook dedicated the new Steve Jobs Theater, using a recording of Steve Jobs' own words about making things with `a great deal of love:'

The new iPad mini 6 is redesigned and looks like the iPad Air that was introduced earlier this year.

Here is Apple's overview of the new iPad mini.

The new iPad mini has the bionic A15 chip, a USB-C connector, supports the apple pencil gen2, and offers 5G cellular optional connectivity.

Here is an iPad comparison page.

Some people have complained that the new iPad mini has `jelly scroll.' This is generally common with LCD displays, but some users say they see it more on the new mini. Others do not see it. As it turns out, it depends on the user's reading speed and screen orientation. The best explanation is provided by iFixIt, see video starting at 49 seconds:

Olga reports getting a new iPad mini and loving it. She does not encounter any jelly scroll because she does not speed-read. :-)

You can compare all 4 new models side by side.

The reviews are in, the new iPhone 13 family gets high marks. Pinnacle of the mainstream, says iMore, praising the significant battery life boost and the cameras.

Here is a nice online tool iPhoneStudio.app that lets you visualize how a case will look on an iPhone 13.

`It takes a lot of energy to light up and refresh that display, so the fewer times it has to redraw what you’re looking at, the better. Other devices with high refresh rates might adjust based on what is showing on the display. For example, if you’re watching a film shot at 24 frames per second, the display might refresh at 24 or 48Hz. If you’re playing a game, it might refresh at 120Hz.'

(cont'd) `On the iPhone, that’s still true, but Apple took it further by quietly included a remarkable way of deciding what refresh rate to use. Your iPhone 13 Pro or 13 Pro Max literally measures the speed of your finger on the screen, and then adjusts the refresh rate of the display.'

(cont'd) `Reading a tweet, the iPhone 13 Pro drops down to 10Hz. If you start to scroll slowly, it might choose a faster refresh rate, say 60Hz. If you scroll quickly, it can ramp up to 90 or 120Hz. Apple doesn’t say exactly how many different refresh rates the display uses, only that it designed the system to match the refresh rate to the speed of your finger.'

For the first time this year, Apple put together a short video Guided Tour comparing all 4 models of iPhone 13 (7 mins), and many (most) of the features they spotlight are related to photography. The video is chapterized.

And of course, pro photographer Austin Mann has published his iPhone 13 Pro camera review all the way from Tanzania, with some beautiful examples of the new camera capabilities. He concludes with buying advice and `an image that says it all.'`

how to sell older devices

If you are trying to make room for new devices, here is what you could do with the older ones:

Gift them to someone who will appreciate them: friends, or family, or donate them.

If you want to sell them, Apple gives you instant credit when you purchase a new device. They even give credit for non-Apple devices, such as Androids.

Consider SellCell.com. They do meta-comparisons of all the 3rd party businesses who can buy older devices from you. With SellCell you will have an extensive comparison of offers for your used device. Worth noting: One company might have better offers for, say, your old iPhone, and a different company might be better for your old iPad.

Another option is to sell it on Swappa.com. It's worth comparing recently sold prices on Swappa vs. SellCell.com to see if the extra legwork of selling on your own is worth it to you.

Here are some significant new features.

Joanna Stern from the WSJ has a fun new video overview of the top 10 features:

Live Text: how to use it, reports LifeHacker. `If you’re using a compatible iPhone or iPad (any device that is running an A12 Bionic chip or higher), your device will automatically and reliably use Optical character recognition (OCR) to pull text from the iPhone viewfinder, Photos, Screenshot, Quick Look, and Safari—and it will even transcribe handwritten text for you.'

Here is another guide on Live Text to compose an email , by Macworld.

Here is a 35-second demo by Apple on how to interact with live text in a photo:

OS 15 has been released and there are some great new features.

Here is a Roundup of iOS 15, by Macrumors, nicely chapterized. (Note that this was written based on beta versions of iOS 15 and some aspects in the article need update, such as SharePlay which is delayed, but nearly all of it is accurate and makes a good reference.)

Roger points us to this wonderful overview of some iOS 15 tricks (10 mins):

Safari has been updated, including the ability to organize & group tabs. Here is a very quick demo on how to do this:

Apple's brief demo of how to navigate Safari in iOS 15:

If you are using iCloud+, With iOS 15, you have the ability to create a new `burner' email address. You can use such an email address for example when filling out a web form, when you don't want to reveal your real email. Go to Settings > [your Apple ID name] > iCloud > and tap Hide my email, and select Create an email address.

See all the new faceTime features with iOS 15. Including some very significant ones, such as faceTime link (can join FT calls via a link) and join FaceTime on the web (for those pesky Android users!). SharePlay features will come with iOS 15.1.

New features in Keynote, Pages, and Numbers, for both iOS and macOS.

Olga has switched to Magic Lasso ad block app for her Mac, iPhone, and iPad, and recommends it highly. There is a free version which is excellent and also a pro version that is even better.

Sketchball is a fun fun game and it's free. You getto draw lines to get the ball to move to the finish line.

Paper camera app as been updated! It had stopped working on iOS 14 but now it's back and works well on iOS 15. It's unique and a lot of fun.

The tagline is: `If you can never get enough true crime... Congratulations, you’ve found your people.' If you like crime & mysteries, consider this podcast: Crime Junkie. It's high quality, professionally made and it's based on true events and crimes.

What is 23andMe Doing with Your DNA? is a recent episode of Sway. Kara Swisher interviews the founder and CEO of 23andMe. `In this conversation, Kara Swisher presses Wojcicki on the ethical, privacy and security questions intertwined with the 23andMe business model. They discuss what the rise of genetic testing might mean for today’s 2-year-olds and how the United States is faring in a “genetic information race” with China. And they dig into the ongoing Theranos trial — specifically, whether the case against Elizabeth Holmes will rein in a Silicon Valley health tech sector that, in the past, has run a little wild.'

Roger S. points us to this nice overview of several tips and tricks for using Photos on a Mac:

Roger H. told us about Chonker Keys, a Kickstarter gadget and a clever idea to control your video calls like Zoom and others.

Almost half of existing Watch users are upgrading to Series 7, except for Series 6 users for whom the upgrade is not big enough, reports iMore. This seems sensible. Series 7 is a worthy upgrade for the earlier editions.

Apple has also introduced some new watch bands and colors. These work on old watches and the new Series 7.

Apple's brief demo on 10 Watch tips -- this is especially good for new Watch users, but everyone might learn a new trick:

SpotCrime.com offers info on crime activity in any neighborhood you want to look up.