We continue to hold our iPUG meetings via Zoom for safety and needed social-distancing, as the Covid-19 pandemic continues. However, we will also assess Webex as an alternative to Zoom.

Since our last iPUG meeting, Arizona has become the state with the fastest growth rate of new infections across the United States.

Why wearing masks is necessary: we wear masks to help others around us. If we all do it, the spread drops significantly. 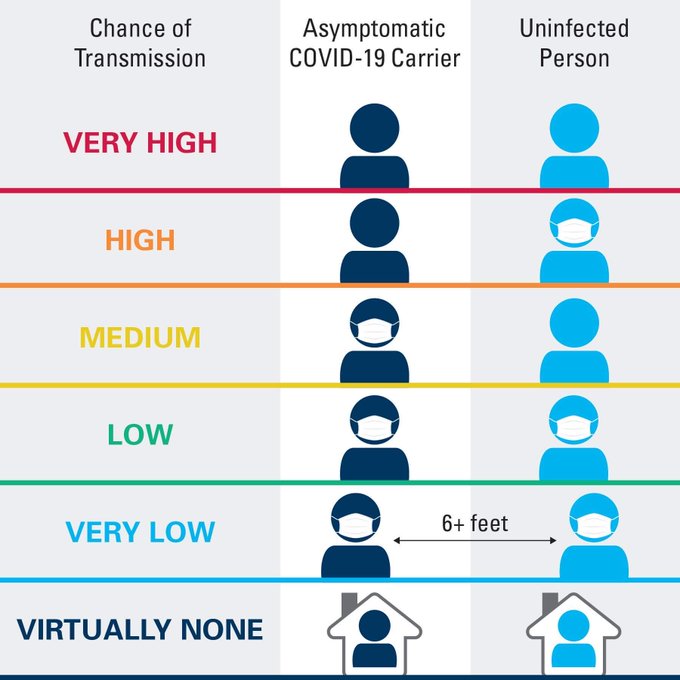 Epidemiologist at Harvard points to a recent study, showing that most spread is coming from younger people:

My earlier worst fears confirmed: Younger adults were the main source of 61 different outbreak clusters in Japan. In this study (in a CDC journal), contact tracing isolated the primary source of 61 epidemic clusters to be mostly younger adults! 🧵 #COVID19 https://t.co/PbIQUnDXV0 pic.twitter.com/3uKvUuUaNZ

His conclusion is that people of all ages need to be careful to avoid the virus: to avoid being a vector of contagion to others and to avoid getting sick themelves.

Apple is investing in combating racial inequity. Tim Cook announced: Cook: `Things must change, and Apple’s committed to being a force for that change.':

The unfinished work of racial justice and equality call us all to account. Things must change, and Apple's committed to being a force for that change. Today, I'm proud to announce Apple’s Racial Equity and Justice Initiative, with a $100 million commitment. pic.twitter.com/AoYafq2xlp

This year, WWDC will happen virtually, due to the virus. Apple announced WWDC 2020. The Keynote will be Monday, June 22 at 10 am PT.

Apple plans to stream the event live. You can stream directly from Apple.com

Apple Plans to Announce Move to Its Own Mac Chips at WWDC, reports Bloomberg.

The case for ARM based Macs, by TidBits. An excellent overview of the considerations.

[ RUMOR ] Speculation on the Apple transition to its own chips: Re-engine, Not Re-imagine

Ahead of WWDC, Apple announced the Swift Student Challenge winners. There are 350 winners in total, representing 41 countries. Here are some more examples of winners.

Apple is offering a Back to School promotion in the United States and Canada. .This year is offering free AirPods with the purchase of an eligible new Mac or iPad.

CarKey is expected to be a new feature in iOS: it will let you unlock your car with your iPhone. Macrumors reports: `CarKey is a digital protocol that lets an ‌iPhone‌ or ‌Apple Watch‌ with NFC capabilities unlock, lock, start, and otherwise control an NFC-capable vehicle.' This feature has not been officially announced by Apple, however evidence of it is found in code. It might be part of iOS 14.

AppleTV+ is introducing Dads. From the description: `Dads is a heartfelt and humorous documentary that celebrates the joys and challenges of parenting in today’s world. Featuring six extraordinary fathers from across the globe, this film offers a firsthand glimpse into the trials and tribulations of modern-day parenting through revealing interviews, rare home-movie footage, viral videos, and hilarious and thoughtful testimonials from some of Hollywood’s funniest celebrities, including Judd Apatow, Jimmy Fallon, Neil Patrick Harris, Ron Howard, Ken Jeong, Jimmy Kimmel, Hasan Minhaj, Conan O’Brien, Patton Oswalt, Will Smith and more.' Here is the trailer:

Apple is planning Interest-Free Apple Card Payment Plans for Macs, AirPods, iPads and More, using Apple Card, writes Macrumors based on reporting by Bloomberg: Apple is expected to roll out the ‌Apple Card‌ feature over the coming weeks. It will give customers the option to pay for their products over 12 months before interest is due.

Apple faces European antitrust investigations into App Store and Apple Pay, reports VentureBeat. `The European Commission (EC) has formally opened an antitrust investigation into Apple over rules that force developers to use Apple’s in-app purchasing technology and prohibit them from notifying customers of alternative ways to purchase or subscribe to content.' Apple has offered an initial reply: `It’s disappointing the European Commission is advancing baseless complaints from a handful of companies who simply want a free ride, and don’t want to play by the same rules as everyone else. We don’t think that’s right — we want to maintain a level playing field where anyone with determination and a great idea can succeed.'

Apple is reportedly disabling and tracking some looted iPhones, reports Marketwatch. A message pops up on stolen iPhones saying, `Local authorities will be alerted' , per social media posts.

Adobe has released a new iOS camera app: `smart’ camera app that lets you add the best filters & effects before you even take the photo. Take a look at Photoshop Camera for iPhone. It's a free download from App Store, with optional in-app purchases at $1.99. (Note: the app requires sign in, and offers Sign-in with Apple, with the option to avoid sharing your email. However, the app eventually asks you to sign into Adobe with your name.)

Anyone can learn to code with Swift Playgrounds. Cook: “Things must change, and Apple’s committed to being a force for that change.”

Washington Post journalist, Bart Gellman, has written a book on data security and the aftermath of Edward Snowden. Kara Swisher interviews him on her Recode/Decode podcast: Bart Gellman: What is Edward Snowden’s legacy? Regardless of how one feels about Snowden, the interview is very interesting and informative about data uses, abuses, mass surveillance, and how data security has changed since Snowden's revelations.

How to access and edit your iCloud or Dropbox files from an iPhone or iPad.

The top 5 calculator tips for iPhone, offered by Macrumors.

Bernie just received Hyperjuice which started out as a Kickstarter project. It bills itself as a `Credit card size 100W charger that quick charges 4 devices: laptop, tablet, smartphone & USB mobile device, all at the same time'.

Coming next month: additions to the Hue family of lights by Phillips, including a bright white bulb, a Bluetooth version of the Lightstrip Plus, and a revamped Hue Bloom.

Apple is once again allowing Apple Card customers to defer payments due to COVID-19.

Apple Watch continues to dominate market-share of smartwatches globally, according to Canalys: 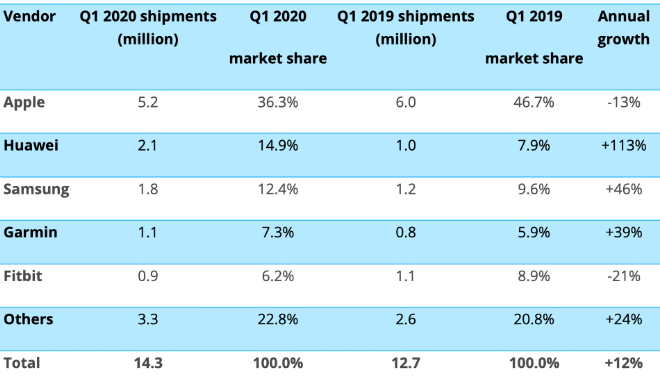 IBM ends all facial recognition business, reports Techcrunch. `CEO Arvind Krishna announced today that the company would no longer sell facial recognition services, calling for a “national dialogue” on whether it should be used at all. He also voiced support for a new bill aiming to reduce police violence and increase accountability.'

Why It Matters That Microsoft and Amazon Will No Longer Sell Facial Recognition to Police, reports Inc.