New with iOS 10.3, here is a list of features, updates and fixes, by MacDailyNews.

watchOS 3.2 opens up Siri to 3rd party developers, such as to send a message via 3rd party apps or to use a ridesharing service. It also introduces Theater Mode. This mutes all sounds and disables raise-to-wake, which avoids distracting people in a movie theater. Take a look:

Apple also updated the hardware line of iPads and iPhone.

The new iPad has been released. It's the most popular size, 9.7'', with a retina display and a brighter screen. The `Air' name has been retired. Just iPad. It starts at $329.

Here is a summary of the iPad change, by SixColors.

The iPad mini did not change processors or display, but it increased capacities. It is now available in only a 128GB configuration for $399 (or with cellular for $539). That replaces the previous $399 model, which offered just 32GB of storage.

`Every customer who buys iPad from Apple will be offered free Personal Setup, in-store or online, to help them customize their iPad by setting up email, showing them new apps from the App Store and more', Apple announced.

Apple also introduced the new (PRODUCT)RED special version of the iPhone 7. Also, the iPhone SE doubled in storage for the same price (now in 32 GB and 128 GB choices).

A four-year old boy in England used his mom's thumbprint to unlock her iPhone and then used Siri to dial the police for help. This saved his mom's life. Help arrived in 13 minutes and took her to the hospital. Read all about it, on Buzzfeed. Here is the emergency call audio:

Duet is an app that turns your iPad into an extra display for your Mac (and even your PC). Optionally, if you have an Apple Pencil, it works With Duet Pro,to turn your iPad and Apple Pencil into a professional graphics tablet. The app is optimized specifically for designers, illustrators and artists. Zero lag due to the wired connection. The app has very enthusiastic reviews on iTunes. Take a look:

AnyList has been updated with new features: now you can optionally enter prices for items in your shopping list. In fact, prices can be store-dependent, so you can compare and decide where you can save most. Also, you can now enter quantities for items on your list. AnyList is one of the best iOS apps.

Project Ina is an app for those who live in Tucson and need to get traffic alerts and Ina road construction updates.

Roger gave a demo of Instamic, a small gadget that is both a `smart’ microphone and an audio recorder. It started out as an IndieGoGo project, and now it is becoming more available as a regular product. Roger has been very happy with it. It can be used by anyone who needs to record sound, for bloggers, journalists, for school and work projects, or simply to document the sounds while traveling. There are water-resistant and water-proof versions also.

Above is Roger's video experiment using an iPhone 7 with the native Camera app for the video, including audio. As he moves farther away, you will notice some audio attenuation, though the iPhone is quite good at picking up the sound.

Above is Roger's video experiment similar to the the previous one, using an iPhone 7 with the native Camera app for the video, but using Instamic for the audio portion. You can hear no audio attenuation as he moves farther away. The Instamic is attached to his shirt.

Our other Roger showed us the brand new OmniCharge. This gadget is a compact power bank with an AC/DC Power Outlet and two USB Fast-Charging ports for powering nearly any device. It detects the devices connected to it and offers optimal charging to avoid damaging your electronics.

Lofree is a mechanical keyboard that intends to give you the feel of a typewriter for your Mac of iOS device, writes Macworld in their review. It has a retro look designed to give you a nostalgic feeling and is available in several colors. It offers advanced features: simultaneous pairing to three devices, different backlit options, wireless/wired mode. Available at IndieGoGo. 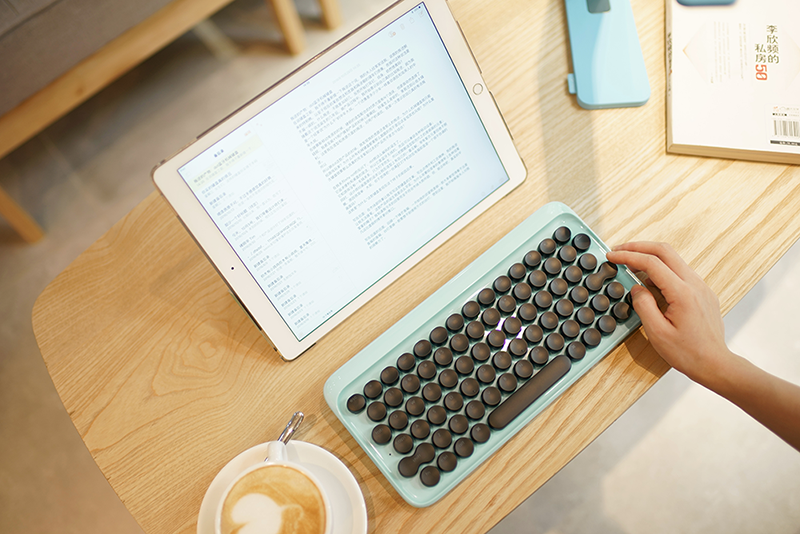 Roger points us to Qwerky Writer, a retro-style keyboard that is wireless and can work with an iPhone, iPad or Mac. It has a USB and Bluetooth wireless connection. See FAQ list for more info. Retails for $249.

Canary has released Canary Flex, a weatherproof security camera that can be used in wireless or wired mode.

A smartphone can accurately test sperm count with a small accessory, reports NPR. `The device costs about $5 to make in the lab. This low cost could help provide much-need infertility care in developing nations, which often lack the resources for currently available diagnostics.'

Lee points us to travel vests, jackets, skirts and pants by SCOTTeVEST which are designed to hold a lot of gadgets while traveling, saving space from a carry-on, or potentially avoiding an extra one altogether.

Last week, Congress voted to repeal privacy protections for consumers of broadband services. Here is an overview, with more details, by Cloak.

Here is the simplified version of events by comedian Stephen Colbert: `Scrapping of Internet Privacy: Something We Can All Hate Together’ regardless of ideology or politics... (Watch from min 0 to about 3:20, the rest is unrelated):

What can you do about this? The short answer is, use a VPN. And choose a VPN that you can trust.Here is how to protect your privacy from your internet service provider, by the EFF.

Apple iPhone 7 is being hardened to handle military-grade secrets, reports TechRepublic. Originally, they considered Android but it was deemed insecure. The UK Ministry of Defense describes the iPhone as the `device of choice.' `Telecoms giant BT is hardening the security of the device to allow UK military personnel to use it to discuss 'secret' matters and for storing sensitive data.'

FBI Director James Comey claimed that `There is no such thing as absolute privacy in America; there is no place outside of judicial reach.' He claimed, `Even our communications with our spouses, with our clergy members, with our attorneys are not absolutely private in America. In appropriate circumstances, a judge can compel any one of us to testify in court about those very private communications.' He also said that, in his view, encryption shatters the bargain between privacy and security.

Recall that James Comey was suing Apple to create a `backdoor’ in iPhones and iPads in order to access user data. Apple vehemently disagreed with this and Tim Cook made an official statement that `Privacy is a human right’ and Apple respects privacy and security. The immediate battle was won by Apple in the courts and James Comey stepped back. However, the fight is not over.

Evernote announced and then back-pedaled on plans to use user data for `machine learning' and originally planned to have employees access user data. When an uproar ensued, Evernote shelved the plans.

With watchOS 3.2, here is Control Center.

How to use your bluetooth accessories with your Apple Watch.

Olga gave a demo by playing music from her watch to a wireless Oontz Angle 3 speaker. Go to Music, choose watch as the source, and select the song or album.

You can also use your Apple watch to control music playing on your iPhone. Go to Music, choose iPhone as the source, and select from your playlists, songs, or Beats 1.

How to use your iPhone to translate words from a foreign document into English. No app required.

Auto-play videos are awful. How to

Want to make iPhone videos and edit them like a pro? Video Basics for All: Shoot your iPhone, Edit Like a Pro is a short online tutorial/class you can take on Skillshare.com. It is taught by the Community Manager at Vimeo. In the end, you will learn how to make a 60-second video about yourself that is engaging and professional. This can be used by artists, job seekers, small business owners.